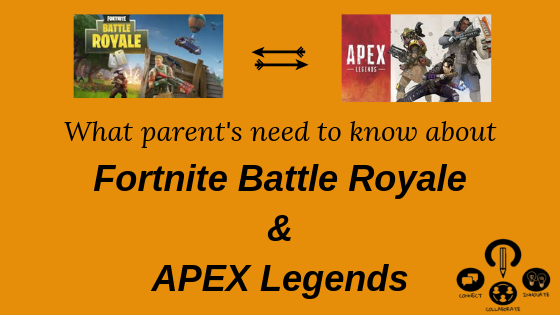 When I was younger, Battle Royal had a whole different meaning than it does today.  It was always associated with WWF/WWE multi-competitor wrestling matches where one wrestler is eliminated until only one is standing.  Today, throw an “e” at the end for Royal and it is in reference to a genre of books, games, movies that involve a fight among many combatants…where the goal is to be the last one standing.

Battle Royale video games are becoming extremely popular amongst the gaming community…especially kids.  As the father of 3 boys, two extremely popular ones are Apex and Fortnite. I wanted to take the time in this post to provide some answers to questions parents may have regarding these two popular “battle to be the last person standing” games.

What is the game all about?

How violent is it?

Can my kid play and chat with strangers online?

Is the game appropriate for my child?

One major question asked from parents  is should I let my child play or when should I let them play.  Unfortunately, there is not a clear cut nor right or wrong answer to these questions.   Each family/child has different circumstances and philosophy. Some things to consider regarding these games or other online activity:

Hopefully answers to these questions and minor suggestions can help guide you along your child’s online journey in this fast paced technological world they are growing up in.